Not ready to call it a night after partying the night away at a Las Vegas club? No worries, head over to an After-Hours club and keep the night (or morning) going. The After-Hours parties cater to a niche market of people that can make it through the night and to locals that may be just getting off work. For the past 15 years, Drai’s at Bill’s Gambling Hall on the Strip has dominated the market and established itself as the go-to party. Recently, other clubs have stepped into the After-Hours market and have been well accepted and with the closing of Drai’s (temporarily while the hotel is under renovation), it has allowed the others to step up and show what they can do. Let’s take a look at your options: 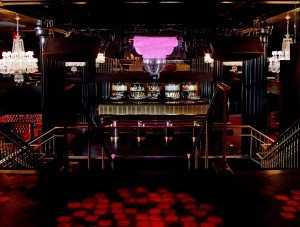 After closing its doors in early 2010, Body English has re-surfaced at the Hard Rock with one of the hottest after-hours parties in Vegas. Located underground, Body English features two distinct rooms that keep the party going all night. They offer intimate lighting, elegant leather booths and multiple bars and dance floors while showcasing indie, electronic, rock and pop music spun by an impressive list of resident underground DJ’s. The Nightclub opens at 10pm and the After-Hours kicks off at 2am every week from Thursday to Sunday night.

The Artisan Boutique Hotel is located just off Sahara Avenue and a short ride from the strip. It is a unique non-gaming art-themed hotel that caters to the Vegas traveler looking to get away from the glitz and glamour of the Strip. The Artisan Boutique Ultra Lounge, much like the rest of the hotel, is as unique a place as you will find in Las Vegas. The walls are covered in reproductions of famous paintings and empty frames and the vibe is laid back and casual. The After-Hours party here can be found on Friday and Saturday nights.

Having just opened a few months ago, The Act Nightclub is known for its “Broadway-esque” performances and an experience totally new to Las Vegas. It was just recently announced that The Act will begin an After-Hours party of its own starting on April 6th, 2013. More info will be made available as we receive it, but we expect this to be a wild and entertaining party.

Of course, you can always head over to one of the popular Las Vegas strip clubs to end your night as well. Many of these are open 24 hours a day.

For more info on any of the After-Hours parties or any nightlife inquiries, reach out to Red Carpet VIP. Our VIP Specialists can help make sure that your next trip to Vegas is filled with fun and exciting nights of partying. Give us a call today at 1-888-847-6483.