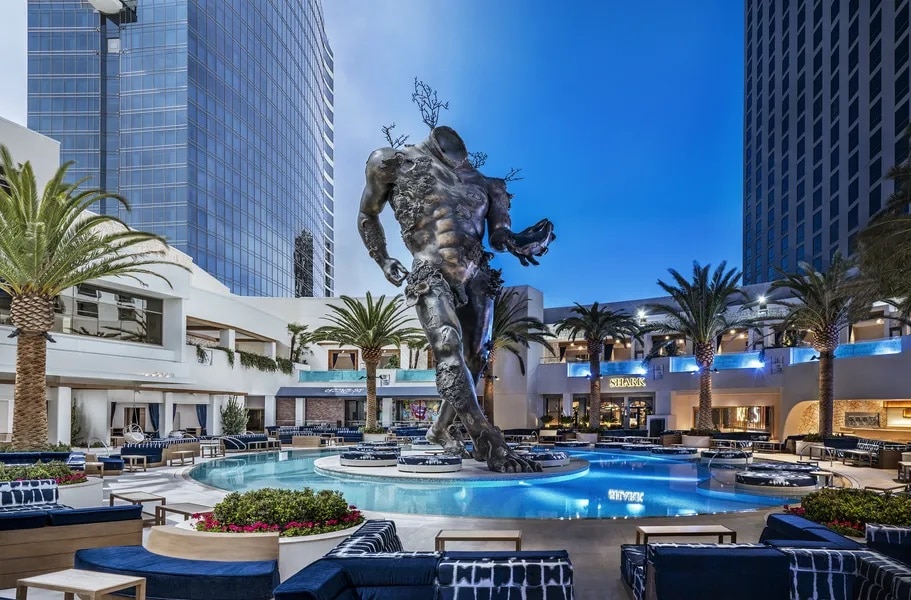 The Palms is building a 100,000-square-foot, multi-level dayclub and nightclub with a massive glass wall-operable door dividing indoor and outdoor spaces, a DJ booth that rotates 360 degrees, a supplemental dome cover that will make it a year-round destination and a 65-foot bronze sculpture of a headless demon.

It’s going to be KAOS.

Set to open in April, the club and amphitheater-style complex is the last big piece of the resort’s $690 million update by Station Casinos, which acquired the 17-year-old off-Strip hotel and casino in 2016. “The opening of KAOS will be the culminating moment for the repositioning of Palms’ renovation,” general manager Jon Gray said in a statement. “We’ve assembled an incredible team of operators, attracted the biggest names across a variety of genres of music and designed a next-level space that will change the club landscape across the globe.”

KAOS takes over spaces previously occupied by the Palms pool and the Rain nightclub. The dayclub is designed by Friedmutter Group LV while the nightclub is designed by the Rockwell Group. As reported Wednesday, the first round of exclusive artist residencies at the new venue includes English electronic music trio Above &amp; Beyond, hip-hop chart-topper Cardi B, Oakland rapper G-Eazy, longtime Vegas club mainstay, DJ and producer Kaskade, and performing for the first time here in two years, Grammy-winning producer and DJ Skrillex.

Imagine attending a Las Vegas pool party in the shadow of British artist Damien Hirst’s eerie, six-story sculpture “Demon with Bowl.” You look around to see layers of private cabanas—39 of them across multiple levels—with sparkling glass pools jutting out over and around the crowd, people dancing and splashing inside them. This could happen at KAOS’ “luxe Greek-inspired oasis” dayclub, as most of its cabanas will feature cantilevered glass pools. Besides the rotating DJ booth that sits at the center of the indoor and outdoor areas, the pool club portion also features an additional stage and live entertainment performance space and “the city’s largest LED wall” on the eastern side of the hotel’s Ivory Tower, streaming live shots of the club for Vegas visitors outside the resort to enjoy.</p>

Pool party season in Las Vegas currently begins in March and runs into October, but dayclub business has grown so lucrative in recent years that several venues have experimented with offseason programming, most notably Marquee’s “dayclub dome” that has added a roof to the Cosmopolitan club for several weeks during winter months. KAOS will be the first Vegas megaclub to be built as a year-round venue. Its nightclub space, according to today’s announcement, “takes inspiration from a modern playhouse, with art and architecture working hand in hand to create a surreal, ever-shifting experience.”

The Palms has also woven technology in the KAOS logo, “the first-ever audio-powered living brand logo” designed to capture the sonic energy created by the club. The “O” in the club’s name is based on 12 audio variable inputs that use voice and music to create its shape, color and motion. KAOS’ first five resident artists are the first to debut this new technology, created by AKQA Portland, with their own unique sound-generated icons being unveiled across social media today, and you can create your own version of the KAOS “O” via an interactive platform on the website at palms.com/kaos.