Going to Las Vegas? Make sure you go downtown to see the real city.
by Zachary Hayworth

Las Vegas wasn’t always giant mega resorts and fountain shows on the strip. If you’re coming to Las Vegas, you won’t see the real Las Vegas until you head downtown and see it like your grandparents remember it. In fact, the Las Vegas strip is actually a town called Paradise, Nevada. North of the strip begins downtown Las Vegas. Fremont Street, is the most well known street located downtown, and dates back to 1905. It received the first gambling license in the city in 1931.

Downtown, you can enjo 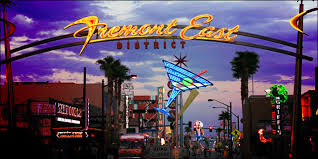 y some of the coolest attractions anywhere in Las Vegas. Above the street, tourists fly by on zip lines, Elvis Impersonators are out in full force, and performance artists are covered in body paint. On almost a nightly basis, there are free concerts and light shows. Downtown Las Vegas also has some exceptional deals. At the smaller, historic casinos downtown, you can find amazing food and drink prices, with some specials as low as $1. Rates for nightly accommodations at casino hotels also tend to be much lower than the mega resorts.

While much of downtown will remind you of the good old days, there are also some vast improvements. The shoe company, Zappos, owned by Amazon, is now headquartered in the former City Hall. Trust us, it is worth an hour of your time to take a tour of Zappos and witness a company culture like no other. Customer service agents lay on beanbag chairs while technology workers play mini golf during their lunch breaks. In fact, the C.E.O. of Zappos has contributed over $300 million of his personal money to revitalizing the downtown Las Vegas area. Among the recent developments downtown is Container Park, which is a shopping center made out of old shipping containers, and home to many retail businesses including seven restaurants and bars. Once you have dinner and a drink downtown, Red Carpet will handle all of your needs once you venture back to the strip. Make sure you save some energy for a great night out once you return!