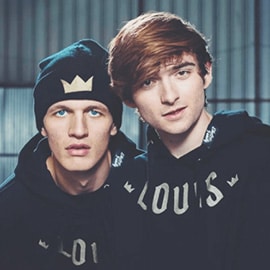 In times where it becomes easiest to feel anything but, Louis the Child is here to make you happy. Over 50 million Spotify streams later, the two Chicago-bred wunderkinds have done just that, spreading glitzy, electronic bliss through stadium-ready anthems like “It’s Strange,” Icona Pop collaboration “Weekend,” and “Fire.” But their versatility and emotional range shines through brightest on most recent release, “Love Is Alive” (ft. Elohim), showcasing an understated tenderness, which Billboard praised as “soft and soothing.”