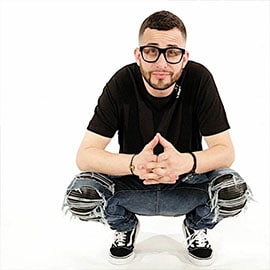 Born and raised in Los Angeles, SKAM Artist DJ, “Justin Credible” has always had a passion for music.

Justin Cerdible’s DJ career began at the age of 16 working for local house parties and school events. After high school, Justin took his talents on the road, from Fresno California to Palm Springs, then landing in Las Vegas. There, he worked at the local radio station in the production department and as a part-time on air DJ.

After years of determination, Justin landed his dream radio Job at Power 106 in Los Angeles, where he immediately hit the ground running, DJ’ing any party or club he could get booked at. Here Justin continued to build his relationships in the industry and partnered with DJ SourMilk to create the powerful L.A. Leakers duo. Together they share one of the hottest music/news websites in the country, www.LaLeakers.com and have released songs with artists such as Future, Wiz Khalifa & Kid Ink just to name a few. The L.A. Leakers have also become one of the pinnacles to where Hip Hop artists come to drop their freestyles, recently featuring Belly, Joey Bada$$ & Vic Mensa.

Justin can be heard every night now on POWER 106 from 7pm-Midnight where he is joined by DJ SourMilk. Justin continues to strive for more and can be seen performing at the top clubs and festivals around the country sharing his musical taste and passion!