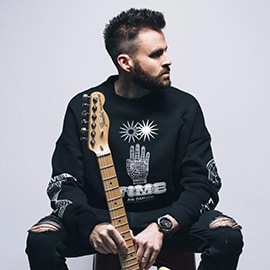 Gareth Emery, also known variously as GTR, Cupa, Digital Blues, Rue de Gar, and Runaway, is an English DJ and producer with an open-minded and fuss-free approach to spinning and producing several styles of electronic dance music, including tech-house and progressive trance. Known overground since 2002, Emery first gained attention with his remix of the Shrink’s “Nervous Breakdown” and his own single “Mistral.” Voted into the Top Ten of DJ Mag’s Top 100 poll in 2009, Emery has remained a popular DJ, issuing albums like 2010’s Northern Lights and 2016’s 100 Reasons to Live.