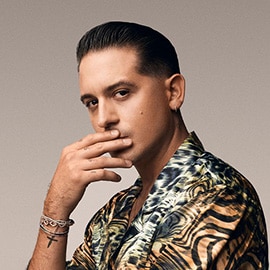 Gerald Earl Gillium, known as G-Eazy, was born in Oakland, California. He started his career while in college at the Loyola University in New Orleans. Dressed in black with his hair slicked back, G-Eazy adds a touch of class to hip-hop. For as traditionally dapper as he may be, he’s got both feet firmly planted in the future. In 2012, he released Must Be Nice, which allowed him to tour with Hoodie Allen and end up on the Van’s Warped Tour. With the release of Endless Summer, G-Eazy started to garner attention from both the backpackers and the mainstream with the next chapter is already unfolding. 2013 saw G-Eazy complete his first headline tour, selling out shows everywhere from New York to Los Angeles. From the overwhelming success of the tour Paste Magazine named G-Eazy in their top artists to watch in 2013 and High Times Magazine named him the “Best New Artist of 2013”. G-Eazy continues to thrive and in 2014 came out with his first release on a major label, These Things Happen. The growth and success from this album allowed him to embark on an international tour. In 2015, When It’s Dark Out was released and includes many well-known hits like “Me, Myself, and I”.