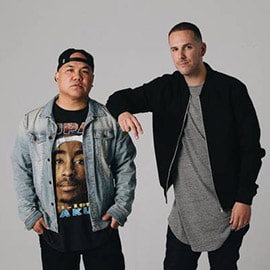 Renowned local DJs Eric D-Lux & DJ Five come together to form the powerhouse duo known as FAED. The Life and Times of DJ Five… He’s either standing behind the turntables or sitting at the poker tables. 24 hours a day, 7 days a week. And maybe a little sleep, but that’s his business. Whichever tables you find him at, just keep in mind that DJ 5ive is dangerous. Groomed in one of the epicenters of turntablism, Cerritos CA, it was a simple task for DJ 5ive to become the top seed in Las Vegas, Nevada. With DMC-caliber skills, impeccable mixing, a vast knowledge of music, and a love for Hip Hop that has spanned decades, DJ Five has emerged as the one definitive go to man in Sin City’s burgeoning nightlife industry. He was voted the #1 DJ of 2004 in Las Vegas’ eyes-and-ears, LAS VEGAS LIFE MAGAZINE. When pressed to reveal what has put him there, he states “I can smoke, drink, text message, dance, mix, and cut all at once.” He does all the big Las Vegas events and has played at every hot spot in Las Vegas, Los Angeles, San Francisco, and New York. DJs across the nation show him love whether he’s the visitor or the visited. Initially inspired by DJ Premier’s work on the Gangstarr classics, DJ Five honed his craft by mimicking DJ Jazzy Jeff’s Live at Union Square. His knowledge of rock and pop music came from those late nights spent in Las Vegas strip clubs, all the while straddling that line between mainstream and street cred by associating himself both with the “backpack” Hip Hop movement and paying close attention to the trajectory of Hip Hop as it crossed over into popular culture. His eclectic tastes and eccentricities behind the wheels of steel soon brought him into the company of 5 other like-minded DJs: Vice, Graham Funke, OB-One, StoneRokk, and Cobra. Together, they formed the Abe Froman Showmen in an attempt to preserve DJ culture and restore the term to its original glory by promoting creative programming, good music, and competent mixing…the heart of DJing, which has lost some of its shine in this era of celebrity guest spots and new jack wannabes.

With a dedication for music, two turntables, vinyl records and a radio, Eric D-lux cultivated the means necessary to captivate any event or nightclub. This Grammy nominated songwriter and producer commenced his course at the young age of 19 in his home town Los Angeles, California. He began his career at the #1 Rhythmic CHR Radio Station in Los Angeles, Power106 FM. After being discovered by fellow Angelino and Power 106 DJ, Vice, Eric D-lux soon entered the local Hollywood club circuit that would eventually lead him to multiple club residencies in nearby Las Vegas. “That first time I landed in Vegas and walked off the plane, I couldn’t believe I was about to play at the MGM.

Vegas is the Major League for DJ’s, Just to be able to reach that level, was insane to me.” Within two years of working in Promotions at Power 106, Eric’s talent and potential would take him to Host and DJ overnight radio. Just six months in to his overnight show, radio executives would notice his talent and quickly offer him the opportunity to host prime time radio, weekdays from 3p-7p. “It didn’t hit me at first, it happened so quick. It wasn’t until I got text messages and comments on my social media pages that I realized the entire city of Los Angeles was listening. I was so humbled and inspired, knowing what I said or played live on the radio would have an impact on someone’s life.” Now, with a daily routine of afternoons on Power 106 and nights at the hottest clubs in Hollywood, Eric would soon discover a new emerging talent that would be destined for the music and nightclub community. “You meet new people all the time, you build great relationships and memories that go with them. I remember meeting Redfoo at Banana Split Sundays, a club DJ-AM used to do. It was so much fun, we were just drinking buddies having the time of our lives to music we loved. So naturally, I got this idea that was perfect for describing the nights and fun we had in LA and Vegas. I spoke about this concept for a record with Redfoo, “Shots”, and right away he was on board, he loved the idea. Then I called Lil Jon and immediately he jumped on the record. It was crazy how it all came together.” Weekdays Eric is on-air at Power 106 FM from 7p-12 midnight, outside of Power 106 he holds residences at his second home, Las Vegas. With weekly nights at Marquee, Hakkasan, Drai’s, Tao, and Omnia, Eric can be seen live behind the DJ booth pursuing his passions and living out his dreams on two turntables.