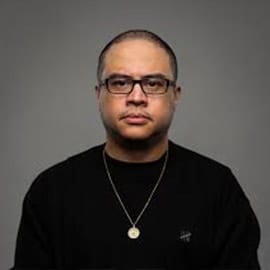 DJ E-Rock grew up in San Francisco as DJ culture was blossoming. With legends like Q-Bert, Apollo and Shortkut in his backyard, E-Rock was exposed to pioneers at a young age. He turned this love for turntablism into his first Bay Area radio at the age of 15. He’s still the youngest on-air DJ to grace San Francisco’s airwaves. Over the past 20 years, E-Rock has risen from local stardom to national icon. Today, he headlines Saturday nights for the world-renowned LIGHT Vegas, sharing the stage with top musical talents including John Legend, Ludacris, T-Pain, Ne-Yo and J. Cole. Prior to taking over at LIGHT, E-Rock drove massive crowds to Haze and 1OAK Nightclubs. He also holds residencies in Chicago, San Diego and Hollywood – just to name a few. E-Rock helped launch Vegas-style nightlife in San Francisco – one of the top markets in the world for live entertainment. With stints at Infusion Lounge, Temple & Love & Propaganda, E-Rock most recently, he brought a true open format experience to the W San Francisco. Though E-Rock travels the country, he always supports the home team. He’s the official director and a member of the San Francisco 49ers DJ program, and was the official in-stadium DJ for the World Champion San Francisco Giants at AT&T Park for 5 years.

With an uncanny ability to adapt to music’s ever-changing landscape, E-Rock continues to dominate radio. His newest show, Radio BassMent, is now syndicated nationally with exclusive guest mix support from Diplo, Dillon Francis, Jack U, Galantis, Major Lazer and Grand Theft. Aside to being syndicated in multiple markets, you can also catch E-Rock live on air every Sunday evening from 5-7pm on KPWR, Power 106 E-Rock’s gift for music has grown over time as has his deep understanding of music. Expanding his arsenal as a producer, “Move It All Around” has been played on countless radio shows, at clubs and music festivals. From the international mecca of live music in Las Vegas to the roar of the crowd at his hometown Levi’s Stadium, E-Rock’s profile continues to soar.