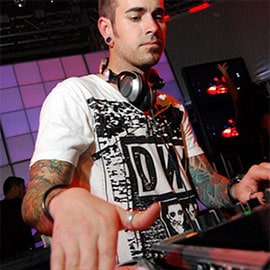 Justin Bueltel (born in November 1980), known as Shift or DJ Shift, is an American DJ and producer of electronic dance music. “Shift”, meaning change, suits his personality and skillset perfectly when talking about his craft. This is due to his well-known ability to work with any genre of music, or combination of multiple genres at one time, to produce dynamic and high energy music sets. In addition Shift is quite known by most in the industry for possessing one of the most critical skillsets of being a professional DJ, which is the ability to read the crowd and change a performance on-the-fly in order to keep the energy of the event high.

Hailing from Las Vegas, Nevada Shift has rightfully established himself in the most elite class of DJs, continuously and regularly playing all venues and events ever worth mentioning in this global mecca of nightlife alongside just about any major artist you can think of in today’s pop culture. As the resident DJ since 2004 of the world’s largest pool party, better known to all of you as REHAB inside the Hard Rock Hotel. Shift has also resided at Wet Republic since the Grand Opening in 2008 every Friday for Maxim’s Hot 100 Contest, located inside the MGM Grand Hotel. Shift has been awarded “Best Pool DJ” multiple times from The Las Vegas Spin Awards not only for his skills but due to the fact that he has effectively monopolized it for so many years that there has just been no competition. Shift has also resided at Pure Nightclub in Caesars Palace twice a week for both their Industry Night, as well as their most marketed tourist night since 2007. Additionally, Shift is known for frequently playing such venues as Hakkasan, XS, Tao, Marquee, and Light so as you can see (if you are familiar with any of the hotspots in Las Vegas Nightlife from the last 12 years to present) there isn’t a place that he hasn’t blown the roof off of.

The Las Vegas Spin Awards also awarded Shift the crown of “Best Main Room DJ” of 2012, quite the significant nod in a nightlife powerhouse like Las Vegas. Additionally he was awarded “Biggest Following” in 2010. Additionally, when he’s not tearing it up in Sin City he also regularly jet-sets all the top entertainment meccas that this country has worth mentioning (LA, San Diego, San Francisco, Chicago, NYC, Miami). 2014 marks his sixth year running with a continuous residency in the Bay Area. Shift can also be found heating up the sandy beaches of Cabo or somewhere in the Virgin Islands shuttin’ it down for the masses.