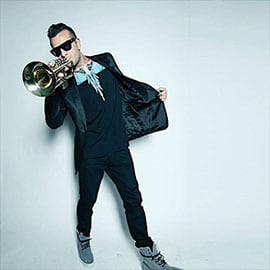 Irish DJ and producer Fergie has been entertaining people since he could barely walk and took up DJing not long after that.  He’s best known for his heavy-hitting, maximal style of party techno as well as being one of the most loveable and charismatic DJs in the business.  He’s been resident at mega-club brands from Godskitchen to Trade, and from Space Ibiza to Hakkasan Las Vegas. During his tenure as a BBC Radio 1 presenter, he was an early advocate for the new wave of techno that was emerging at the time.  His best-known tracks include “Anon” and his remix of Slam’s techno anthem “Positive Education.” His debut album “Dynamite and Lazerbeams” (released on his own Excentric Muzik label) received critical acclaim from MixMag and DJ Mag and was voted album of the year at the Dance Music Awards.

While still a teen Fergie became versed in the art of DJing and established his musical style at the Trade party in London during the late 90’s under the tutelage of house hero Tony de Vit. Throughout the noughties, he was featured in DJ Mag’s Top 100 DJs poll seven years in a row and currently holds the record for the highest new entry (8th in 2000). Coming off a successful BBC Radio 1 Essential Mix that year, the station immediately signed him and fellow techno legend Carl Cox as it’s very first Essential Mix residents.