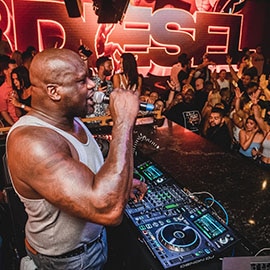 Shaquille O’Neal has done a little bit of everything in his time. From sports to acting to investing, he can’t be stopped.  Known in large for being one of the greatest NBA players in history, his success extends far beyond the court. His most recent (and ironically his earliest) endeavor? Electronic music!

This may not be a huge surprise to longtime fans. O’Neal taught himself how to spin as a teenager and played gigs to earn extra cash throughout high school and college, eventually leading him to start producing rap music in 1993. His debut album, Shaq Diesel  received platinum certification from the RIAA.

He went on to release four more studio albums and one compilation album. Despite his obvious passion for music, Shaquille O’Neal put most of his focus into basketball between 1992 and 2011. The 7-foot-tall star has been DJing as DJ Diesel for a few years now, playing Tomorrowland since 2015, but this past year has been particularly huge for him.